My latest read ‘Angel’s Breath’ is a contemporary piece of vampire fiction about human nature, our sacrifices for love and humanity’s struggle to persevere.

Set in a time of Brean’s life that many would be able to relate too, ‘Angel’s Breath’ by Yvonne Von Innes has the potential to be applicable and appealing to a wide audience. It’s vampire fiction at its most tasteful and refined. The concept of the vampire very much symbolises the darker side of human nature. But admittedly I prefer my vampire fiction to be a little grittier and much more prominent.

The vampire elements of this story are very much secondary to the human elements this is just one of the reasons why you would carry on reading. The relationships, emotions and even the plot is all governed by Brean’s hopes of retaining as much of his humanity as possible. It pulls you in with the heavy focus on the human versus supernatural and good versus bad- two wars which all the main characters endure on some level. 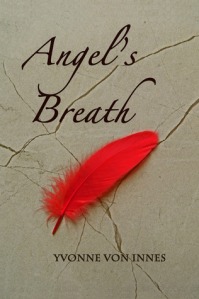 Innes’ characters are evidently strongly influenced by their surroundings. This is something which in my opinion, can be difficult to effectively convey, in a way which makes it noticeable to the reader. Yet Innes has managed to successfully allow the reader to make the connections between the character’s environment and their personalities. The relationship Innes builds between Brean and Viara is painstakingly and purposefully built. It’s a relationship built not only to be tested, but to last and endure. The great thing about it is that the language is so skilfully used, that the reader is able to feel, understand and imagine every small step their relationship takes. This doesn’t appear to be a reflection of the fast-paced world of dating and relationships in real life- but it is more refreshing to read because of these differences. The inspirations for this novel are clear as the more savvy reader may notice the main vampire is called Drake Clarmont- aka Dra…cla..?

Although consistent I found the character development too slow for my own curiousness. After introducing such complex characters, it would have been nice to understand them better- particularly Viara and her involvement with the allusive organisation PEACE. Furthermore, the inclusion of an organisation such as PEACE in a novel, requires the author to ensure their reader is fully aware of their purpose, role and (to put it simply) why they are such a big deal. For most of the novel PEACE is either non-existent or in the background. Details about PEACE are offered far too sparingly and when they do surface there is nowhere near enough given, therefore the reader remains uninformed. While this does offer the reader the opportunity to experience and learn at the same pace as main character Brean; by the end of the novel it is clear that Brean has been brought up to speed and yet the reader is still none the wiser. In the final chapters the action of the novel reaches its peak and the hidden agenda of PEACE is still only briefly glimpsed.

The concept of a ‘blood child’ is intriguing. In my reading it would appear to be somewhere between having a blood donor and a slave. But what makes it so intriguing is that it’s not something I remember coming across in any other vampire fiction I’ve read- and I’ve read a lot. A novel that can offer you something totally new is the best kind. Overall the novel isn’t worlds away from other works of vampire fiction. But there is enough variant in the details, characters and plot to prevent the reader from becoming bored.

There is a continuous flow to the novel which makes the plot easy to follow, helped by the strong and authoritative tone and detailed descriptions, wherein Innes is able to clearly convey all the required human emotion. However I did manage to spot one spelling mistake, proof that proof-readers and editors are not always to be relied on. Fortunately this doesn’t detract from the rest of the novel’s events. The pace of the final chapters is noticeably increased, to the point where it feels a little rushed. There’s no easing as the time-frame jumps forward several years, where Innes offers the reader a brief insight into seemingly happy but demanding new lifestyle that Brean and Viara seem to have created for themselves.

Reading Innes’ ‘Angel’s Breath’ was an enjoyable and thoroughly engaging read. It was consistent in the level of detail offered, and both tone and pace were well matched to the topics explored and events which unfold. However there is always room for more character development to fuse a reader’s interest.