Wish by C. H. Aalberry, the last novel I read in 2013, is very fast paced and action-packed- Aalberry doesn’t hold back when he immediately launches the reader into the world in which the novel is set.

Initially readers are first introduced to two very different, but equally interesting characters. Aalberry writes with a unique compassionate edge that leaves readers wanting to know more about even the most arrogant characters. A plot of self-discovery is a staple one of the fantasy genre and Wish is no different in that respect. But the characters, their carefully crafted traits and slowly revealed backgrounds are unique and carry this plot well.There are elements of JK Rowling’s Harry Potter and Terry Pratchett’s Discworld, and C. S. Lewis’ The Chronicles of Narnia; it has a clear story line with easily likeable characters. Any aged reader who is a fan of all the above should enjoy this fantasy-adventure. 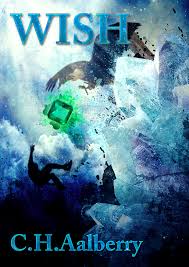 I did come across the occasional spelling that seemed out of place. I find this is often the case with fantasy novels- authors feel that a differentiated spelling keeps the reader grounded in the fantasy. Whilst this may well be true, especially for works such as The Lord of the Rings, but in my experience (for the most part) words that require the reader to reach out to their common sense to deduce their meaning; will always take the reader further out of the novel- rather than pulling them farther in.

Otherwise Wish is consistently written, concise where appropriate and offers detail in equal measure of humour and sincerity. There are some delightful instances of personification. I found it really lifted the tone of the novel, keeping it interesting and intense but also retaining some lightness in its tones- reminding the reader that this is an adventurous fantasy tale.

The more I read the more I wanted to know about our main character Dak and his companions.  Aalberry has a wonderful knack for bringing characters to life- making them more appealing and enjoyable.  Often novels with a lot of side-line characters have too many to do them all justice, so they get forgotten or lost in the plot, suddenly disappearing. But in Wish, although the reader meets new characters in each plot twist and indeed each chapter, throughout the novel I felt that Aalberry did his best to do each character justice. Each one had a back story of sorts, each had a part to play in either Dak’s or Aventur’s story, because of this care and attention to detail I never felt that any character had been forgotten.

Wish has plot twists in every chapter, absolutely brimming with action, magic and adventure. It’s well-written, uncomplicated, easy to read and enjoyable because of all that.

Have your say! Cancel reply